The storage of cryptocurrency funds is something important for every investor to consider. With the high threat of cyber crimes in the cryptocurrency industry, storing funds securely can be challenging. One method for safely storing funds that is popular amongst cryptocurrency holders is known as cold storage. In cold storage, funds are stored in a physical device off of a custodian platform like an exchange or wallet provider. This way, the funds are stored on a device that does not have a constant internet connection - making it difficult for cybercriminals to gain access to it. In this article, we will take a look at what exactly cold storage is, as well as compare two of the most popular cold storage providers: Trezor and Ledger. 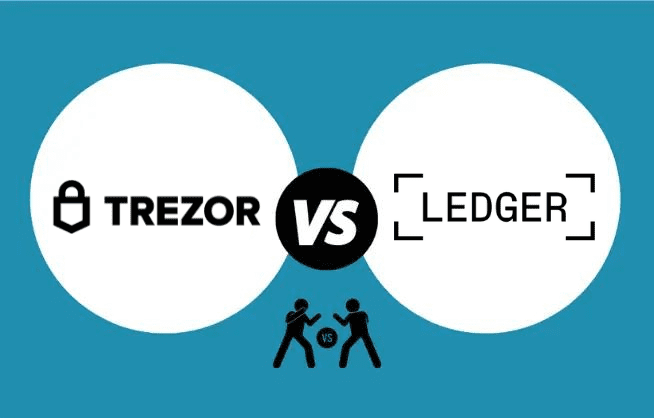 What Is Cold Storage?

When a checking, savings, or credit card account with a traditional bank has been compromised, the bank is able to refund the lost or stolen money back to the account holder. However, if your cryptocurrency account or wallet has been compromised and your bitcoin has been stolen, the owner would be unable to recover their coins. The reason for this is that most digital currencies are decentralized and do not have the backing of a central bank or government. Hence, there is a need for a safe and secure medium of storage for bitcoins and altcoins.

A cryptocurrency wallet is associated with the public and private keys of a cryptocurrency owner. The private key given to any cryptocurrency user is a unique string of alphanumeric characters required to access the user’s cryptocurrency holdings for spending purposes. The public key is akin to an account name and helps to identify a destination for coins that are being sent to the wallet. Two people making a transaction with cryptocurrency, where one is a seller and the other a buyer, will have to share their public keys with each other in order to complete the transaction. The buyer of the commodity or service sends the required amount of cryptocurrency to the seller’s divulged address as payment, and the blockchain verifies the validity of the transaction and confirms that the buyer or sender really has those funds to send. Once the payment has been delivered to the address, the seller or receiver can only access the funds through their private key. It is, therefore, imperative for private keys to be kept secure because if stolen, the user’s cryptocurrency coins and tokens could be unlocked and accessed from the address without authorization.

Cold storage resolves this issue by signing the transaction with the private keys in an offline environment. Any transaction initiated online is temporarily transferred to an offline wallet kept on a device such as a USB, CD, hard drive, paper, or offline computer, where it is then digitally signed before it is transmitted to the online network. Because the private key does not come into contact with a server connected online during the signing process, even if an online hacker comes across the transaction, they would not be able to access the private key used for it. In exchange for this added security, the process of transferring to and from a cold storage device is somewhat more burdensome than the process for a hot wallet.

Trezor and Ledger are two well-known names in the cryptocurrency industry, and both offer secure hardware wallets that support over 1,000 coins and have incorporated cryptocurrency exchanges. Trezor is part of SatoshiLabs and was launched in 2013 with headquarters in Praha, Czech Republic. Ledger was founded in 2014 and is headquartered in Paris, France.

Let’s take a look at some of the main aspects of each hardware wallet provider.

Trezor and Ledger are among the best cryptocurrency wallets and offer similar features. While both brands connect via a USB cable, the sleek Ledger devices look like ordinary, steel universal serial bus (USB) storage devices. Meanwhile, Trezor devices are a bit lighter, housed in a plastic casing, and are uniquely shaped. All four devices connect to Linux, Windows, and Mac computers. However, Trezor users can only connect to Android devices, whereas Ledger also supports iOS phones.

The Trezor models also feature larger displays, making it easier to read the screen. The Ledger One has a 128x64-pixel, organic light-emitting diode (OLED) screen versus the Nano S’s 128x32-pixel OLED display. The difference is more noticeable in both companies’ premium models, with the Trezor Model T offering a liquid crystal display (LCD) color touchscreen that’s 240x240 pixels. In contrast, the Ledger Nano X display is an OLED 128x64 pixels.

When it comes to connectivity, mobile users appreciate the optional Bluetooth capability of the Ledger Nano X—a feature not offered by Trezor.

Trezor and Ledger are industry leaders in security, as both companies provide private keys that never leave the devices. The Trezor models are built on a single chip base, whereas Ledger devices use a double chip base. Ledger’s second chip is a bank-grade secure element (SE), providing additional security against hardware-based attacks.

Trezor and Ledger devices are relatively easy to set up because they follow strict account verification and passphrase configuration. The lower-end models have two physical buttons and smaller screens, which can be trickier to navigate for people accustomed to touchscreens and larger displays. But, the actual setup and use are about the same between the devices.

Storage devices from both Trezor and Ledger come at a bit of a price. However, it is a once-off purchasing fee. Plus, would you rather pay a bit of a fee now, or deal with all of your cryptocurrency holdings potentially being stolen? If you prefer the prior, then the cost for devices will make a lot of sense. Currently, the price of Trezor devices ranges between 53 to 164 Euros, and the cost for a Ledger device is between 59 to 119 Dollars. At the current exchange rate, this means that a Trezor device can cost up to around $160. This means that Ledger devices are slightly cheaper than Trezor devices.

Has a Mobile App?

Only Ledger has a mobile application that is both Android and IOS compatible.

Trezor vs Ledger: Pros and Cons

The secure hardware wallets designed by Trezor and Ledger are user-friendly and safe for storing cryptocurrency. Both support thousands of coins and tokens and provide access to cryptocurrency exchanges. However, the Ledger Nano X offers Bluetooth, and both Ledger wallets support Ripple, Monero, and Tezos. Meanwhile, the more expensive Trezor Model T features a touchscreen that is easier to read and use.

Although it’s a tough call, Ledger edges out Trezor due to its lower price, mobile app, iOS connectivity, and support for a few more popular coins and wallets than Trezor.