Everyone who is somehow related to the web design niche should have heard about TemplateMonster. One of the leading digital marketplaces features a collection of more than 120K high-quality digital assets designed and developed according to the latest web design standards. Without a slight exaggeration, the company offers everything needed for a quick start of your industry-specific project for online or offline use. However, TemplateMonster digital marketplace hasn’t always been this way. Like many other businesses, it started as a small startup providing web design and development services for local companies.

How did everything begin? How did they manage to grow into one of the biggest digital marketplaces in the world? We have reached the company’s founder David Braun with these questions. Here’s what he has shared with us. 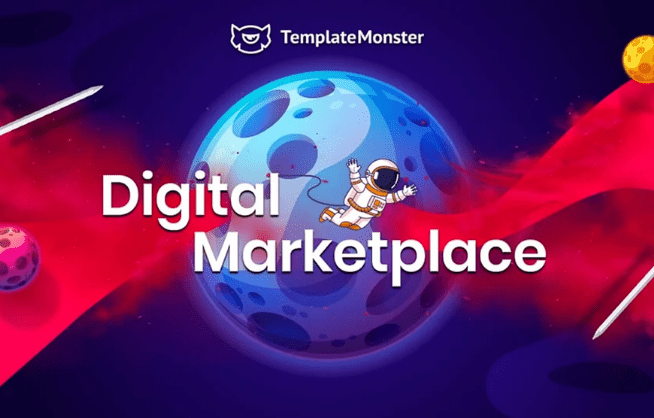 TemplateMonster was founded back in 2002. It’s the official launch date. However, a small team of web designers and developers gathered together back in 1998. Back then, they were only starting to learn the market. Back in those days, TemplateMonster was a small web design studio that didn’t have many clients, and the team was working mainly for the sake of the idea. From 1998-2002 nobody could have imagined what results in their hobby would take them. They had no idea of what a website template is and how it can help in website creation.

In 2002, the number of orders started to grow, making the team start looking for ways to streamline the workflow and find new ways of doing the same job in a shorter time. It took some time to find the perfect success formula, and in 2003 TemplateMonster became the leading provider of HTML templates.

As time passed, new CMSs were introduced in the market, which resulted in new types of products hitting the company’s inventory. From time to time, it was difficult to resist competition and always stayed up to the trend. There were both rises and falls. Luckily, the difficulties made the TemplateMonster team only stronger and more stress-resistant.

The company has always followed the latest trends and innovations. Moreover, they often became trend-sellers in the niche. The launch of the TemplateMonster affiliate program in 2003 was a huge step forward, reaching more clients and finding more partners to help the company grow and evolve.

Soon, in 2004, the launch of the first eCommerce templates followed. Little by little, new product types hit the TemplateMonster collection, and in 2005 the company reached the 10K templates milestone. The same year the MonsterPost Blog was released. The main news portal of the TemplateMonster digital marketplace continues to treat us with the latest news in the niche until this moment.

And what about WordPress, you would probably ask? The era of WordPress-based designs started in 2006 at TemplateMonster. Now, there are thousands of unique ready-made WordPress themes matching all topics and businesses available for download. In 2008, TemplateMonster inventory counted 20K digital assets, and the 30K templates milestone was recorded soon in 2010.

The client base was getting bigger and more diverse as well. People from all over the world started to order ready-made digital products from the company. So, in  2014 they decided to translate their website into Russian, German, and Spanish languages. It made things simpler for people to look for the needed items and order them in their native languages. Moreover, the company launched localized versions of its blog and made its content more comprehensive for the target audiences.

Switching to the TemplateMonster Digital Marketplace

The inventory of ready-made themes compatible with blogging CMS and eCommerce platforms continued to grow rapidly. Along with selling premium-quality web design assets, TemplateMonster started to update the inventory with freebies. Most of the free WordPress themes to download from TemplateMonster look pretty much similar to their paid equivalents. Yet, they do not include paid plugins, many web design variations, and other goodies of premium products.

At some point, a growing number of independent authors started reaching out to the company with requests to start selling their products at templatemonster.com. In 2017, the company decided to make a big change and transform into a digital marketplace. From that moment, they started to welcome independent web developers and web design studios to join and start selling their exclusive and non-exclusive items to more than 2 million customers.

TemplateMonster digital marketplace welcomes authors to start selling digital assets matching such categories as ready-made web themes, graphics, audio, and video assets, etc. Besides adding new items to the categories of products already available in the inventory, TemplateMonster authors are also welcome to add new product categories. Whether an author sells items under an exclusive or non-exclusive license, he can earn up to 65% author commission. The marketplace offers different author earnings for different types of products.

The commission that authors of exclusive themes will receive depends on the sales volume - the more one sells, the more he earns. If an author sells exclusive web designs and participates in the TemplateMonster affiliate program, the overall earnings from one sale referred can make up 95% - i.e., 65% author commission + 30% affiliate commission).

Authors selling Shopify and OpenCart themes can take advantage of the Author-Driven prices program. It suggests that you decide at what cost your items will be sold in the marketplace. TemplateMonster will provide you with the recommended price range, with the minimum and maximum price recommendations.

Besides, TemplateMonster digital marketplace helps authors promote their products on blogs, social media, email newsletters, affiliate websites, etc. The marketplace is proud to join forces with thousands of affiliates worldwide. It welcomes everyone to join and start making money with little to no effort. Affiliate partners get all they need for the promotion of selected items from the TemplateMonster digital marketplace. It includes ready-made banners, product showcases, product landing pages, and more.

Other reasons why TemplateMonster digital marketplace is the right choice for authors include:

You can upload more than one product for review at one time.

Why TemplateMonster Is Better Than ThemeForest

TemplateMonster is not the only digital marketplace for selling and buying web design assets. ThemeForest is one of its major competitors. However, many users and authors come back to TemplateMonster because of the following reasons:

TemplateMonster constantly improves its services, thus providing authors with the maximum convenience and safety while selling in the marketplace.

TemplateMonster is a vivid example of how far your business can go. You can launch a startup with a team of only a few people. However, if you trust your gut and feel enthusiastic about your project, you can reach impressive results. Today, the TemplateMonster digital marketplace features one of the biggest collections of 196K+ web design assets matching different purposes and businesses. Besides selling high-quality digital products, the marketplace also welcomes authors to join and earn up to 65% author commission from every sale. Would you like to sell your products to more than 2 million active users? Feel free to join and start selling.
WEB DESIGN ARTICLES 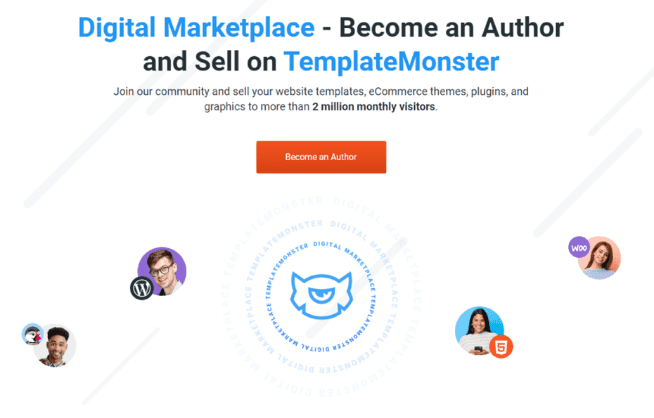