(The pricing's currency will vary depending on your location, you can always set your online location by using a VPN provider, choose the best option for you by clicking here). 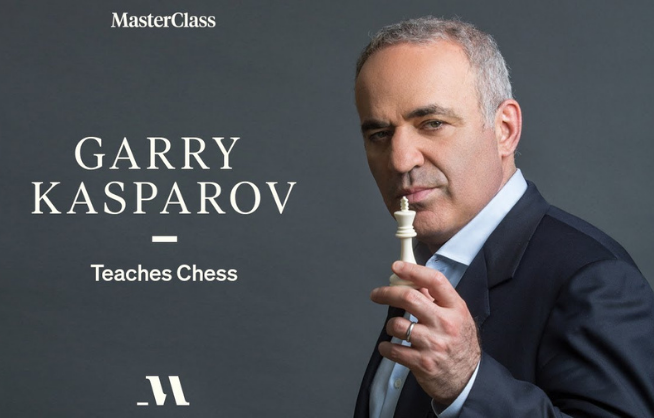 1. Introduction
04:35
Garry's teaching reflects his style of play: direct, dynamic, and ambitious. He shares what he will cover in this class, including concrete instruction for players at different levels.

2. Garry's Chess Fundamentals
18:08
Learn how a World Chess Champion thinks as Garry shares the tenets of his chess philosophy.

3. Double Attacks - Part 1
21:17
The double attack is a simple concept that can often be deadly. Garry offers elegant examples to show its power—and how to defend yourself from it.

4. Double Attacks - Part 2
16:18
Garry offers an in-depth study of the double attack to help you expand your practical portfolio.

5. Skewers
17:18
Garry believes in the power of geometry. Through these positions, he shows how you can get the best out of your pieces—even the weak ones.

6. Discovered Attacks
15:58
Missing a discovered attack can have dramatic consequences. Garry’s examples reveal how even top players can overlook this surprising move.

7. Pins
16:28
Not all pins are created equal. Understanding their effectiveness means understanding the power of paralyzing your opponent’s pieces, especially in the endgame.

8. Deflection/Attraction
23:25
Defense requires harmony, and knowing how to disrupt your opponent is critical. Garry shows how to identify an opponent’s target and then find a tactical way to destroy that defensive coordination.

9. Interference
13:40
The moment an opponent’s pieces lose their ability to counter threats, you can start building your attack.

10. Overload
12:52
The most destructive form of overload is when a piece has to watch for threats coming from different directions. Garry’s examples include one move that made his opponent literally jump out of his chair.

11. Winning Trades
11:39
Trading pieces doesn’t mean simply eliminating pieces of equal value. In the endgame, it can create a decisive advantage—or save a game that appears hopeless.

12. Endgames - Part 1
21:35
In Garry’s experience, the endgame never means the end of excitement. He shows the purity and creativity of the endgame—including drama, shouldering, and zugzwang.

13. Endgames - Part 2
15:48
Garry continues his endgame lessons with pawn endgames, rook endgames, queen v. pawn—and, of course, the king’s role. While it can seem slow and weak in the middlegame, an active king is vital in the endgame.

14. Endgames - Part 3
14:32
Garry believes miracles happen when you know how to create them. While most players spend time on openings, you can make game-changing miracles by studying the rich possibilities of endgames.

15. Openings - Part 1
14:01
Garry played e4 as a child prodigy and stuck with that move as the under-18 chess champion of the USSR and under-20 champion of the world. Learn when and how he grew his repertoire.

16. Openings - Part 2
20:38
What happens when your opponent plays your opening? How do you find a satisfying opening both psychologically and strategically? Is there such a thing as universal opening advice?

17. Openings - Part 3
11:21
He brought abandoned openings back from the dead and built a database of almost 20,000 different analyses—but Garry believes there are still more ideas to surface.

19. Jason's Game
06:42
“What else can you do?” Garry breaks down Jason’s moves and answers questions about what his opponent could have done differently.

20. Molly's Game
06:04
“It seems like the whole army is coming for me.” After Molly opens with the Sicilian, Garry counters with a quiet move. From there, Garry talks through how he developed his pieces and explains how Molly could have created more discomfort for him.

21. Dennis' Game
09:08
“No, I didn’t see that line.” Garry points out a line that Dennis missed and shows how he created the illusion of an attack without any real threat.

22. Case Study: Opening
20:52
Garry dissects his opening against Vishy Anand in 1995. The discussion includes analysis of a decisive mistake, strong attacks, tactical motifs, and a powerful yet quiet move that came at a rare early stage of the game.

23. Case Study: Endgame
18:24
Garry focuses on pawn endgames and the drama they can create. An appetite for the beauty of the endgame is one of the best ways to improve your chess.

24. Garry's Journey
14:12
Even when Garry was a kid, the number 13 held special meaning for him. He shares the realization of that numeric destiny and the forces that shaped his singular style of play.

25. How to Analyze
05:45
World champions climb to the top through brutal and relentless analysis. Learn what Garry believes is the greatest danger facing players.

26. Computers and Chess
09:12
The sting of Garry’s loss to Deep Blue has softened over the years. He looks back on that defeat and forwards to the benefits of computers in chess training.

27. Mental Toughness
17:40
The poster that hung over Garry’s bed as a kid included a line borrowed from Soviet dissidents: “If not you, who else?” Garry talks about triumphing in the most grueling matches of his career, as well as how he recovered when his mistakes felt like physical pain.

28. Closing
02:46
Whether you’re playing at home, at a club, or in a tournament, the variations in chess are limitless—and so are the possibilities for improving your game.

29. Bonus! Secret Novelty
06:47
After a crushing loss to Karpov, Garry analyzed his play and came up with a variation that he never used.

The Garry Kasparov MasterClass is a fantastic in depth piece of training taught by one of the greatest chess players that have ever lived. chess is one of the best hobbies you can pick up, great minds such as Stanley Kubrick played chess, it's an excellent game for exercising your mind and improving your decision making in every area of your life.

!
!
SUBSCRIBE
Terms and Conditions checkbox is required.
Something went wrong. Please check your entries and try again.
98% OFF No Code Needed 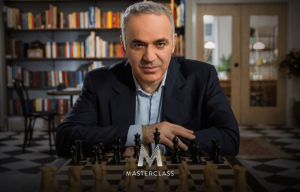 Get 98% OFF Garry Kasparov MasterClass