The Aaron Sorkin MasterClass used to cost $100, now you can get access to ALL masterclasses thanks to the MasterClass Annual Membership, by doing so, you will save close to 98% OFF what you would usually pay for getting access to all those masterclasses. Aaron Sorkin is an American writer, screenwriter, producer, and director with astute intelligence, he uses sharp dialogue in his screenplays, television series, and plays that are often set within the combative backstage world of politics, law, or entertainment.

1. Introduction
4:30
Meet Aaron. He's an Oscar winner, a TV hitmaker, and the writer of some of the smartest dramas ever to hit the screen. And now, he's your instructor.

2. Intention & Obstacle
10:13
Every great story is born from intentions and obstacles. Learn how to build the "drive shaft" that will set your script in motion.

3. Story Ideas
15:24
How do you know if your idea is good enough to turn into a script? Aaron walks you through the steps every writer should take to test an idea—and decide whether it will work best in TV or film.

4. Developing Characters: Part 1
11:46
Aaron shares some of the decisions he made to develop some of his most unforgettable characters—like The Social Network's Mark Zuckerberg and The West Wing's Toby and Leo.

5. Developing Characters: Part 2
15:21
Your characters don't have to be like you—or even likable. Drawing on examples from A Few Good Men and Steve Jobs, Aaron explains why he always empathizes with his characters even if he disagrees with them.

6. Research
09:45
Good research is the key to a great script. Bad research is a waste of time. How can you tell the difference? Aaron shares lessons from Malice and The Social Network to help you gather the information you really need.

7. Incorporating Research
09:22
You have pages of research—now what? Avoid clunky exposition and learn how to seamlessly weave research into your story.

8. The Audience
10:53
Aaron knows that the audience isn't just watching his work. They're participating in it, too. Learn how to write stories that will keep them engaged and entertained.

9. Rules of Story
08:07
The rules of great drama aren't new. Here, Aaron explains how most of them were laid out more than 2,000 years ago by Aristotle in his Poetics, and how to use those lessons to become a diagnostician for your own story ideas.

10. Film Story Arc
11:33
Page numbers don't sound exciting, but they're a great tool for tracking the act-structure and pacing of your story.

11. Writing Habits
15:34
Even Aaron gets writer's block. Learn how he gets unstuck and what writing tools he uses to make sure he's ready when inspiration strikes.

12. Group Workshop: Untitled by JJ Braider
14:21
While workshopping J.J.'s script, Aaron shares his tips on writing action scenes that move as fast on the page as they will on the screen.

13. Group Workshop: E is for Edie by Jeanie Bergen
29:12
The offbeat characters in Jeanie's script are a hit with Aaron, who warns about the dangers of getting feedback from close-minded studio execs. (Warning: explicit content).

14. Group Workshop: Chronic by Roland Zaleski
20:58
Discussing Roland's script, Aaron reveals a simple trick that writers can use to justify improbable events in their stories.

15. Group Workshop: The Merc by Evelyn Yves
16:53
Evelyn's TV pilot kicks off a conversation about opening scenes and the importance of showing your audience something they've never seen before.

14:51
In the final lesson, Aaron offers his parting wisdom and leaves you with one more assignment that will last the rest of your life.

The Aaron Sorkin Masterclass is one of the best screenwriting masterclasses out there, all his advises are precious and the exercises included in the masterclass will greatly help you improve your skills, Aaron Sorkin is an outstanding screenwriter, one of the greatest of our times, if you like writing any kind of content you'll definitely benefit from his masterclass. 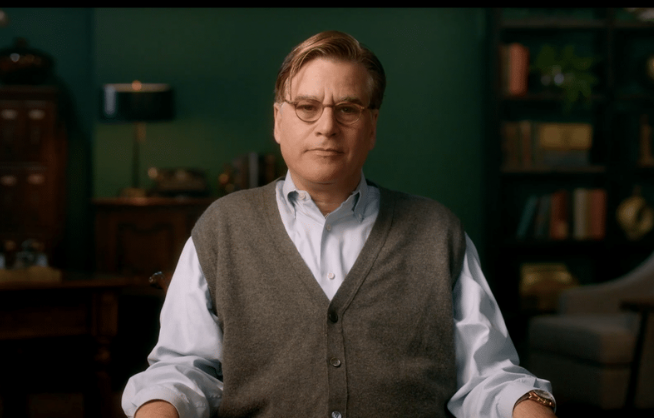